LifeFLOW3D is now featured over at Libre Game Wiki! 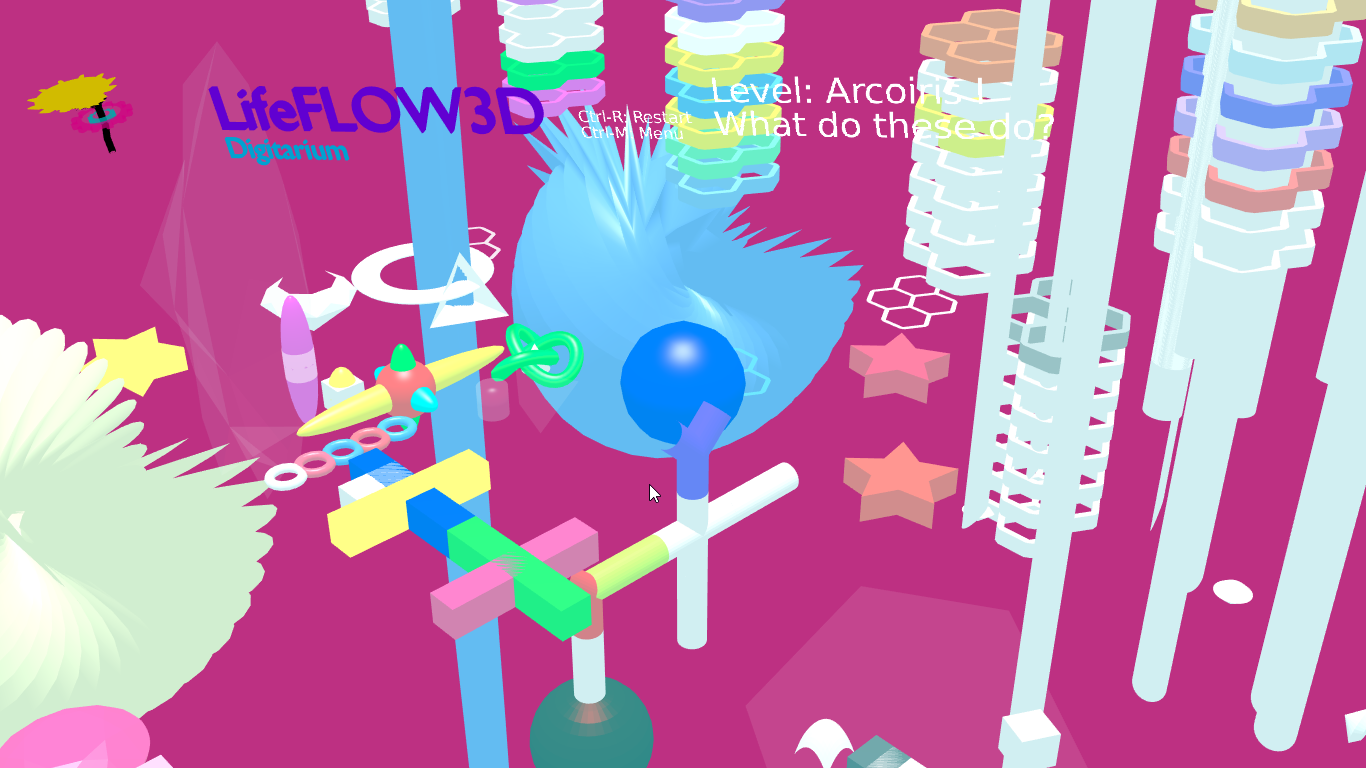 Check it out and make some improvements!
Rock & Roll! :)

LifeFLOW3D Digitarium lets you play with moving software creatures, as they float about and explore their lush environments. Download and play at GameJolt! Project page at GitHub.

LifeFLOW3D Digitarium is released under the viral GNU General Public License 3.0 license, which guarantees you the freedom to use, examine, and share the software.
Learn more about LifeFLOW3D and download it at GameJolt!

You can view the new GitHub page here.
You can download the source files here.
To build LifeFLOW3D, you will also need to download the freely available Blender.
Please send any questions or comments to eagle@eaglegamma.com.
Rock & Roll!!! :)

Finally, here is the LifeFLOW3D Digitarium Beta! :)
Please download, play, and let us know what you think!

Have a listen to the brand new LifeFLOW3D theme music! :)

And here's a cooler variant:

I've been composing up a storm, so there are also some more treats in store...
Please let me know what you think, life@worldsowisdom.com.
Rock & Roll! :)

Here's a gallery of beautiful imagery from the new LifeFLOW, which is now taking shape! :)

LifePathEvo 1!!! :)
First of a couple of variants of the LifePathEvo. This creature type evolves with various subcomponenets. Also able to eat other creatures. Uses energy from consumption, digesting only minimally. First seen in LifeFLOW v1.5. YouTube videos:
LifeFLOW
bact4
Check out the cool new bacterial-style trippy creature!!! :) Thanks to Avril for the artwork/visuals!!! :) This creature has some of the anatomy and physiology of biological bacteria, however it derives its movements more directly from a LifePath. Its behavior can be described as somewhat frenetic, although still exploratory. Offspring include bact1 and bact5 as well as other bact4. Video: https://youtu.be/W0_roGgfOdo
LifeFLOW
LifePath2!!! :)
Check out the coolest LifeFLOW creature yet!!! :) Introducing LifePath2! :) Description The LifePath2 is a path (or series of connected geometric points). Unlike its predecessor species, the more straightlaced LifePath, the newer LifePath2 contains curves as well. The species tends towards largeness, relative to its environment, with sizes ranging from around 50 to 400 in each direction (relative to a 450 square scale). The LifePath2 has a distinctive color set of a bright yellow fill with a bright orange stroke. The overall habit resembles a cactus (like the Saguaro). Occasionally, reticulating curves produce the striking effect of a topographically complex shape with hollow "inner" sections that are actually outside the creature, kind of like a digital atoll. Life cycle The LifePath2 species can be created by hand, or born to other LifePath2 parentage. It roams around its environment somewhat like its predecessor species LifePath. However, sometimes when a LifePath2 encounters another creature, the LifePath2 gets eaten or reproduces. Reproduction can take place by cloning or by producing a litter of three new LifePath2's. Thus, in this species, as in some types of biological creatures, death and reproduction are closely connected. Reproduction occurs around one fifth as often as death, by some reports, although counteracted by the litter size of three, this leads to a homeostatic balance in which the species retains an average population of a solitary specimen, with occasional bursts of reproduction and death. A truly solitary LifePath2, living in an environment with no other generated creatures, will wander about randomly in a tightly confined space like some kind of lunatic. Clearly a symbiotically social species -- or rather a symabiotically social species! Video https://youtu.be/0YlHMh6ewC8
LifeFLOW
Little Flitter! :)
This little beastie goes about the areaz playing dancing laughing interacting, and making the worldz a better place! :) Check it out at LifeFLOW!!!!!!!!!!!!! :) Video: https://youtu.be/gUA5yaG-nEUhttps://youtu.be/pIjGYjesqTMhttps://youtu.be/a8fp4u_S2Xc Rock & Roll!!!!!!!!!! :)
LifeFLOW
Extral
The cool new creature at LifeFLOW! :) This thing does some funky maneuvering in order to chase after other thingoz! :) YouTube videos: https://youtu.be/YZYVUl2t0i8https://youtu.be/KDY6gkDLJ9Q
LifeFLOW